"No, no, no, no, you don't understand the scope of my crime. I didn't kill just one Husnock, or a hundred, or a thousand. I killed them all. All Husnock, everywhere."
― Kevin Uxbridge (Star Trek)

"You have destroyed all human life on Earth. Level one complete!"
― Death Kill City II (The Simpsons)

The ability to instantly end and eradicate an entire species of creatures from a world/universe. Sub-power of Extinction Manipulation and Omnicide. Opposite to Extinction Reversal.

The user can instantly end and eradicate a species of creatures from a world/universe, effectively wiping them from the face of history. This ability allows the user to slaughter certain species before they become a threat to the user or their surroundings. 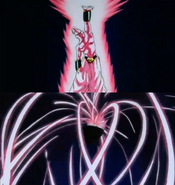 Infinite Zamasu (Dragon Ball Super) using a Chou Makouhou Barrage to wipe out every last human being on Earth.

The Douwd (Star Trek: TNG) are capable of wiping out entire species, as demonstrated by Kevin Uxbridge who wiped out the entire Husnock race, all 50 billion of them.

Jadis (The Chronicles of Narnia) used The Deplorable Word to cause the extinction of all species on the World of Charn except herself.
Add a photo to this gallery
Retrieved from "https://powerlisting.fandom.com/wiki/Extinction_Inducement?oldid=1163437"
Community content is available under CC-BY-SA unless otherwise noted.