The user has or can grow a varying number of eyes on themselves, others or any other surface, allowing more ways to see. They may also visually detect multiple attacks if the user possesses Enhanced Vision. 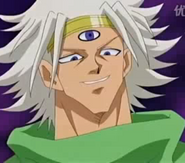 A running gag is that Tom (Eddsworld) will somehow regain his eyes, only for them to be destroyed later, preferably to some kind of laser.

Helmet of Jong (Xiaolin Showdown) give the user eyes at the back of their head.
Community content is available under CC-BY-SA unless otherwise noted.