The True Fae (Changeling: the Lost) are creatures of legend, being able to craft reality in the fashion of stories of old via "talecrafting".

"Cannibalism, mutilation and torture...if we're facing someone who can make that stuff real in a land of magic...We don't have any strategy to fight that, boys."
― Kyle Rayner/Green Lantern to JLA on the Queen of Fables (DC Comics)

The ability to manipulate reality with principles of narrative causality and storytelling. Form of Reality Warping. Not to be confused with Narration or Story Manipulation.

User can manipulate reality using the principles of narrative causality, storytelling, or fairy tales, fashioning reality around them after a favorite story or tale of theirs, making the world into one that has the same rules as the story they're using, and ultimately replicating the results of said story. They can replicate the patterns and symbols from their favorite narratives into reality, becoming archetypes or changing people around them into characters based on said archetypes.

User of Fairytale Warping may believe that they're in a world where everything is alive, and that elements of life follow the archetypal elements from fairy tales, folklore, tall tales, and storybooks. Perhaps this leads to an awareness of the "Fourth Wall". 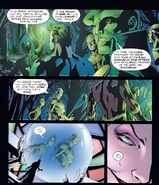 The Queen of Fables (DC Comics)
Add a photo to this gallery
Retrieved from "https://powerlisting.fandom.com/wiki/Fairytale_Warping?oldid=1648064"
Community content is available under CC-BY-SA unless otherwise noted.