"It means that you know something even if you don't know something."
"That doesn't make any sense."
"It doesn't have to make sense. It's faith, it's faith. It's the flower of light in the field of darkness that's giving me the strength to carry on. You understand?"
― Eli and Solara (Book of Eli)

The ability to gain powers from religion. Variation of Affinity. Not to be confused with Faithifery. Opposite to Heresy Empowerment.

The user can gain special powers from their respective religion(s), allowing them to be protected, guided, and enlightened at all times by the supernatural beings of their religion, pray for virtually anything to happen especially when it is to their advantage, and be granted special favors and be given special treatment by the supernatural beings of their religion(s) themselves.

Unlike Worship Empowerment and Belief Empowerment, users gain any ability they want from their belief in the religion(s) and the beings and/or objects that dwell within it, as well of communicating and gaining guidance. 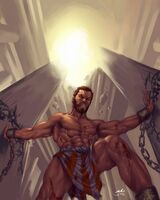 Samson (Judeo-Christianity) a warrior-prophet who despite being blinded and his hair cut he regained his godlike strength through faith in God.

Due to their fervent faith and strict worship in Shintoism, the Five Principal Clans (Highschool DxD/Slash Dog) are blessed by the Shinto Gods with elemental spiritual powers from birth.
Add a photo to this gallery
Retrieved from "https://powerlisting.fandom.com/wiki/Faith_Empowerment?oldid=1685753"
Community content is available under CC-BY-SA unless otherwise noted.