Doma (Kimetsu no Yaiba) can dual wield his Japanese War Fans at such high caliber that he can effectively fight at supersonic speeds while fully utilizing them for both offense and defense.

Users possess great proficiency, capabilities and knowledge in fans, any broad, flat surface that is waved back-and-forth to create an airflow. There are a wide range of fans from different cultures and races, all of each have varying effects when wielded with the prowess of a master. Most users are incredibly talented in utilizing it for aesthetic and performance purposes, like rituals and dancing, wielding fans with exceptional fluidity and beauty. They are also very familiar with the characteristics and attributes of fans, possessing extensive knowledge of them inside out. As a result, they are able to perform advanced actions and feats with fans, like expertly diverting air around fans to generate huge gusts of wind.

In terms of combat, hand fans are quite versatile as well, especially if more durable and sharp, thus being able to be used for both offense and defense. Users can utilize fans to deflect incoming physical attacks as well as deliver swift blows and slashes effortlessly. Some users would be able to dual wield hand fans, or even more depending on their skill. In terms of supernatural abilities, hand fans are usually used by aerokinetic beings as they would aid in channeling their ability and fighting with it. More advanced users would be able to wield esoteric hand fans, like cursed and divine variants.

... and as bladed boomerangs. 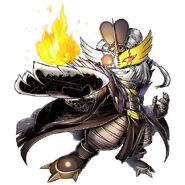 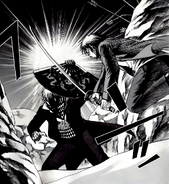 Kagura (InuYasha) uses "Fuujin no Mai/Dance of Blades" via her fan.

The Ancient One (Marvel Cinematic Universe) is a master of Tessenjutsu. 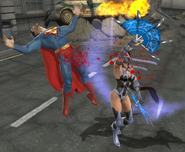 Obito Uchiha (Naruto) using Madara's gunbai in an unorthodox manner: as a flail and blunt broadsword, as well as a shield. 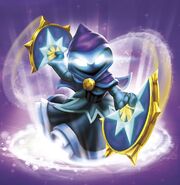 Sir Lamorak (Sonic the Hedgehog) using his dual fan-shaped blades with great proficiency, and even throw them like boomerangs.

Plantain Fan (Valkyrie Crusade) wielding a gunbai, which allows her to produce and manipulate wind, fire and rain.