Lighting a candle using water instead of fire is just one of many examples of fantasy elements.

"Breathe the Fire; Walk the Air; Drink the Earth; Warm your hands at the Water..."
― Greeting from Limbo (Planescape)

User can create, shape or manipulate elements that exist only in dreams/fantasies/imagination. Fantasy elements can come in normal forms like natural elements or forms that are completely outside of logic/sense/understanding allowing them to do things that elements simply shouldn't be able to do or are contradictory to their nature (such as fire that burns before the ignition or restores things instead of burning them, water that makes things dry instead of wet, air that suffocates instead of letting one breathe, etc.).

Unlike imaginary elements, fantasy elements can be literally anything or come in any form, even if it doesn't make any sense or is completely improbable or unlikely (since in the realm of dreams/fantasies elements don't have to make sense or can be completely illogical.). This allows the user to do things that should be impossible with elements like drink earth, breath in fire, drown someone in air, or burn somebody with water. 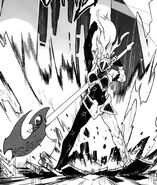 Like all dream demons, Pharos Heracles (Yumekui Merry) is able to use elements that could only exist in the world of dreams, such as using fire to recreate memories of people and dream demons that he killed or burn things in ways that are impossible in reality.
Add a photo to this gallery
Retrieved from "https://powerlisting.fandom.com/wiki/Fantasy_Element_Manipulation?oldid=1344964"
Community content is available under CC-BY-SA unless otherwise noted.