The user's body fat is so thick that it can be used as body armor, causing physical attacks to bounce right off.

Buyon's (Dragon Ball) lard is such that he's unfazed by Goku's Kamehameha.

Fred Dukes/The Blob (Marvel Comics) is a master of this ability.

The Black Bull's (Shadow the Hedgehog) blubbery body makes it resistant to most attacks. 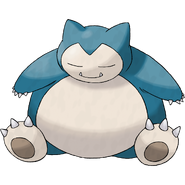 Snorlax (Pokémon)
Add a photo to this gallery
Retrieved from "https://powerlisting.fandom.com/wiki/Fat_Armor?oldid=1503005"
Community content is available under CC-BY-SA unless otherwise noted.