The power to reduce body fat. Sub-power of Fat Manipulation. Variation of Reduction. Opposite to Fat Expansion.

The user can decrease the amount of body-fat on oneself and/or others to varying degrees.

Majin Buu (Dragon Ball series) shedding all of his excess fat during just a few hours of training, though he regained it all after getting hungry afterward. 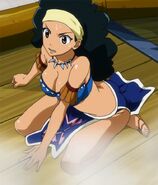 Risley Law (Fairy Tail) with her Gravity Transformation Magic can lose her fat.
Add a photo to this gallery
Retrieved from "https://powerlisting.fandom.com/wiki/Fat_Reduction?oldid=1503008"
Community content is available under CC-BY-SA unless otherwise noted.