After being transformed by the demonic entity, the King of Tears, Johnny Sorrow (DC Comics) found that his face had been so horribly disfigured that anyone who saw him died

Have a face/appearance/true form which kills whoever sees it.

The ability to have a face/appearance/true form which kills whoever sees it. Variation of Countenance and Death Inducement. Opposite to Curative Countenance.

The user can kill multiple beings just by having their opponents gaze upon their face/appearance/true form. 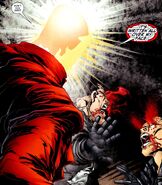 Judge Fear's (Judge Dredd) face is so horrific that it can induce death to anyone who gazes upon it.
Add a photo to this gallery
Retrieved from "https://powerlisting.fandom.com/wiki/Fatal_Countenance?oldid=1521958"
Community content is available under CC-BY-SA unless otherwise noted.