possess a dangerous death-based defense.
The ability to cause death by a target touching your body. Variation of Death Inducement.

The user's body can kill anyone that touches it. Can be induced or automatically activated. Its activation varies: some users can activate the power when they want to but other times it's permanently active and makes for a perfect defense.

SCP-049 - Plague Doctor’s (SCP Foundation) signature ability is to induce death in order to operate on individuals that have been imbued with the “pestilence.” 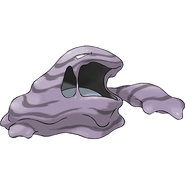 Being a living biohazard of leaking toxic sludge, Muk (Pokémon) can kill nearby plant life and cause severe sickness to a human.

Poisons (Marvel Comics) parasitize Klyntar hosts by making physical contact, killing both the host and the Klyntar while the Poison becomes more powerful.
Add a photo to this gallery
Retrieved from "https://powerlisting.fandom.com/wiki/Fatal_Touch?oldid=1513105"
Community content is available under CC-BY-SA unless otherwise noted.