The Challengers (DC Comics) are free from destiny.

Be immune to the courses of fate

"But I never liked Fate! Predestination goes against the grain. Besides he cheats at cards!"
― Chaos (Aladdin)

"Hey, write your own story."
― The Candlemaker (The Book of Life)

"He did not let the gods roll the dice. Hence, even the gods did not know how his adventures would end."
― Truth discussing Goblin Slayer's ability to avoid and ignore destiny (Goblin Slayer)

The power to be immune to the courses of fate. Sub-power of Causality Immunity.​​​

The user is immune and free from every fate or predestination. This power allows the user to act and think as they wish without following any predictable design and make their own desired mark in life. 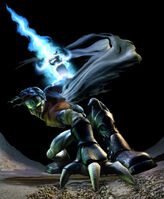 Thanks to his resurrection as a wraith, Raziel (Legacy of Kain) is the only being in Nosgoth that is exempt from the Wheel of Fate, giving him full control of his own destiny.

Sparhawk (The Elenium/The Tamuli) is Anakha, or "without destiny", thus he exists outside of fate and not even the gods can predict his actions.

Ikki Kurogane (Chivalry of a Failed Knight) reached his "awakening" as a Desperado, a human who broken the chains of fate.

Kratos (God of War) is immune to fate. This allowed him to kill the Greek goddesses of Fate, and derail the Norse prophecies of Ragnarok, such as starting it prematurely.
Add a photo to this gallery

Retrieved from "https://powerlisting.fandom.com/wiki/Fate_Immunity?oldid=1651954"
Community content is available under CC-BY-SA unless otherwise noted.