Become the embodiment of fear.

"When the mugger or the thief stops to think twice - that is fear. That is what I am. That is why they hired assassins - because I am the reason the criminals breathe easier when the sun rises."
― Batman (Arkham Origins)

"So, first of all, let me assert my firm belief that the only thing we have to fear is... fear itself — nameless, unreasoning, unjustified terror which paralyzes needed efforts to convert retreat into advance."
― Franklin D. Roosevelt

"It's impossible for words... to describe... what is... necessary... to those who do not know what horror means. Horror. Horror has a face... and you must make a friend of horror. Horror and moral terror are your friends. If they are not, then they are enemies to be feared. They are truly enemies."
― Colonel Walter E. Kurtz (Apocalypse Now)

Users can become an physical manifestation or personification of fear and gain power from the fear in others or oneself. Users can use fear as a power source to extend their life span or as a weapon, they can become immune to death unless certain conditions are met.

Fear (Inside Out) is the emotion and Riley's capacity to feel fear. His job is to keep Riley safe.

Ole's Father (Psychonauts) has always inflicted great fear in Oleander's mind to the point where he manifests into a personal demon.

Huwawa (Valkyrie Crusade) is an goddess of fear. 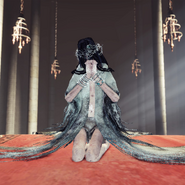 Alsanna, Silent Oracle (Dark Souls II) is the fragment of Manus' soul that represents his fear.

Turbo K.O. (OK K.O.! Let's Be Heroes) is the embodiment of K.O.'s fear, anger, and feelings of powerlessness.

Oz (Monster Prom) is the ancient embodiment of fear.
Community content is available under CC-BY-SA unless otherwise noted.
Advertisement