Enhanced by the fear of numerous hostages, Knox (Heroes) is able to punch through the body of the German and make a hole in the metal locker behind him.

Be empowered by fear.

"I never fathomed that the impurity was alive. That my Qwardian ring was tapping into sentient fear."
― Thaal Sinestro describing Parallax (DC Comics)

"Fear is necessary for evolution. The fear that one could die at any moment. Thank you, Gin. Thanks to your efforts, I have finally risen to an existence that surpasses both Shinigami and Hollow."
― Sosuke Aizen (Bleach)

The power to be strengthened by the fear of oneself and others. Technique of Fear Manipulation. Variation of Emotion Empowerment. Opposite to Wonder Empowerment.

Users become stronger, faster, more durable, etc. through fear of oneself and others, possibly unlocking abilities related to the affinity and enhancing the existing powers. Some users may be able draw sustenance from fear or even slow or stop aging.

Gerard Valkyrie (Bleach) gains strength based on miracles manifested from the fears, hopes, feelings, and desires of the masses. His opponents' fear of him being unbeatable allowed him to manifest it and become truly unstoppable.

Sinestro Corp (DC Comics) feed on fear to empower themselves. 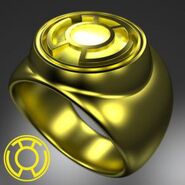 Harvesters like Ian Stone (The Deaths of Ian Stone) can feed of the fears of humans or else they'll starve and get weaker.

Sadao Maou (Hataraku Maou-sama!) can access his demon form through the fear of humans.

The Serpent (Marvel Comics) feeds on the fear that his Worthy instill in humanity, all over the world, ... 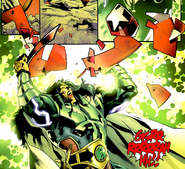 ... until the fear of all of humanity made him powerful enough to perform virtually any feat.

Horrificator (Miraculous: Tales of Ladybug & Cat Noir) grows bigger and stronger the more fear she stirs in others.

Pitch Black (Rise of the Guardians) is strengthened by the fear of others.

Charlotte Linlin/Big Mom's (One Piece) effectiveness in absorbing life is dependent on the victim's fear, the stronger their fear the more vulnerable they are to having their life drained.