The Dread Masters (Star Wars Legends) studied the fear-centric Phobis devices until they became masters of fear that threatened the entire galaxy with their power.

The power to use fear related magic. Form of Magic. Variation of Emotion Magic.

The user is capable of magic based in fear, dread, horror, terror, etc., including the augmentation or elimination of these traits, summoning creatures of nightmares, or using magic to feed off of the fear of others.

The Phobos Spear (God of War: Ascension) is a spear forged from the power of Phobos, the Greek God of Fear, and allows use of his otherworldly terror through etched glyphs along it.

The Dark Scepter (Marvel Cinematic Universe) is a mystic relic capable of amplifying doubt and fear, among light-related powers.

Cul Borson the Serpent (Marvel Comics) as the Norse God of Fear, is capable of sowing and utilizing fear to strengthen himself through Asgardian magic.

Dr. Strange (Marvel Comics), casts a fear spell against the Mighty Avengers making them relive the most painful moments of there adult lives. 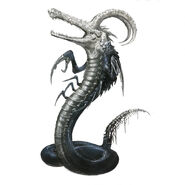 Phasmadaemons (Pathfinder) use fear as a weapon through fear-effect spells, and feed off of the emotion.

Darth Zannah (Star Wars Legends) was a regular practitioner of the Sith sorcery of "summon fear," using it to drive her enemies to madness.
Add a photo to this gallery
Retrieved from "https://powerlisting.fandom.com/wiki/Fear_Magic?oldid=1468012"
Community content is available under CC-BY-SA unless otherwise noted.