The Triple Goddess (Wicca Mythology) is a female moon deity that represents femininity such as sexuality, beauty and motherhood.

Manifest the aspects of femininity.

The user embodies the conceptual attributes, traits and behaviors of femininity/womanhood and gains power from aspects they represent each reflecting the ideal status of being by their physicality, mentality, spirituality and so on.

Standards traits of femininity are traditionally viewed differently throughout cultures and historical periods, but commonly include gentleness, empathy, sensitivity and even their biological sex that users emphasizes their powers and is often associated with their rewards, consequences and responsibility.

The feminine aspects can be different for the principles of womanhood, the foundations in gender identity and perceptions of reality. Both males and females can exhibit femininity aspects, traits and behavior even though they are different, they're still connected to the aspects of masculinity.

As the first woman, Eve (Abrahamic Religions) incarnates all the feminine aspects to humanity. Some legends say that she also represents God's femininity when she was created by God. 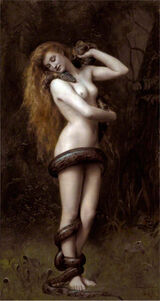 Lilith (Jewish Religions) was originally supposed to be the first women in existence, but in her fall she became a darker symbol of feminine sexuality and temptation.

Gaia (Greco-Roman Mythology) is a nature goddess who represents motherhood by the feminine fertility.

Aphrodite/Venus (Greco-Roman Mythology) is a female goddess that represents the love, beauty and sexuality of woman.

Athena/Minerva (Greco-Roman Mythology) is a female goddess that represents divine wisdom and intelligence of woman.

Hecate (Greco-Roman Mythology) is the very first to embody feminine trinity; the maiden, the mother and the crone and is the one who originated her wiccan counterpart; the Triple Goddess.

Inanna/Ishtar (Sumerian Mythology) is a goddess who proudly embodies many feminine aspects such as love, beauty, sex, desire and fertility.

Diana of Themyscira/Wonder Woman (DC Comics) is an iconic amazonian woman that many see her as the representation of feminine beauty, strength and independence.

Hecateae/The Three (DC Comics/Vertigo)
Add a photo to this gallery
Retrieved from "https://powerlisting.fandom.com/wiki/Femininity_Aspect_Manifestation?oldid=1513118"
Community content is available under CC-BY-SA unless otherwise noted.