Forest Spirit/Shishigami (Princess Mononoke) ancient god with the ability to give and take life.

The power to induce fertility causing growth and reproduction. Sub-power of Fertility Manipulation. Opposite to Infertility Inducement.

User can induce fertility, the natural desire and capability of growth and reproduction, including restoring fertility to infertile/sterile area/beings. In animals this increases both the number and health of offspring's, and gives the parents, in plants in increases the fertility in soil causing healthy botanical growth. The user is able to 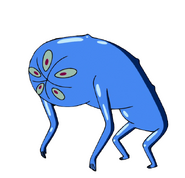 Warren Ampersand (Adventure Time) is an alien shape-shifter that impregnated Joshua with Jake the Dog by biting his forehead and injecting him with his venom, resulting in Joshua developing a large boil that Jake emerged from.

A Facehugger (Alien) orally infests a human with a Xenomorph embryo...

Angewomon X (Digimon) can cause the earth to become fertile and bloom.

Clark's ship (Smallville) was able to cure Martha Kent of infertility, allowing her to conceive a child.

Asherah (Valkyrie Crusade)
Add a photo to this gallery
Retrieved from "https://powerlisting.fandom.com/wiki/Fertility_Inducement?oldid=1397561"
Community content is available under CC-BY-SA unless otherwise noted.