The Employees of the Rabbit Shed Shop (Pastel Memories) are able to learn new skills, talents and powers by physically interacting with fictional characters in person.

Learn/gain skills and powers by interacting with a fictional character.

The power to learn/gain skills, talents, and/or powers by interacting with fictional/imaginary characters. Sub-power of Fictional Mimicry and Fiction Travel. Technique of Book Immersion. Variation of Alternate-Self Learning.

User can learn/gain skills, talents, and/or abilities/powers from fictional/imaginary characters, either by witnessing the character doing it, being taught by them, helping them perform it, and/or even by them projecting the knowledge into their minds. Additionally, user can gain various abilities, powers, and skills associated with role playing games by having knowledge of the game and the character creation elements thereof and merge attributes between games. For example, mimicking and combining the powers of a Kindred from Vampire: The Masquerade with a Paragon from Mutants and Masterminds.

User can learn things that while they may only exist in fantasy/fiction, can still be applied to reality/real life tasks/situations. 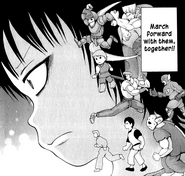 Haruo Yaguchi (High Score Girl) learned several different talents by interacting with fictional game characters that at first only he could see, even learning how to perform a technique in reality that should only be possible in a video game.
Add a photo to this gallery
Retrieved from "https://powerlisting.fandom.com/wiki/Fictional_Learning?oldid=1516212"
Community content is available under CC-BY-SA unless otherwise noted.