Be any fictional character.

"Your just picking and choosing elements from different stories. You can't even settle on what character!"
― Tsuruoka (Love Tyrant)

The ability to duplicate and combine any power, technique, skill and trait of fictional or nonexistent characters. Technique of Fiction Manipulation. Not to be confused with Fictional Empowerment and Fictional Transformation.

The user can duplicate and combine any power, technique, skill and trait of fictional or nonexistent characters in the media or fictional works such as TV Show characters. For example user can learn and perform the Kamehameha (Dragon Ball series) in real life or copy the powers of The Beyonder (Marvel Comics) or even mix the powers of many characters and use it according to the users will giving the user the ability to be any character from Superman to Mother of Existence or even a mixture of both.

Be a Legendary hybrid if you want.

Be a god if you want. 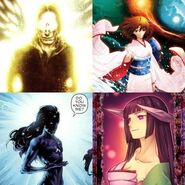 Or you can have all their powers and traits.

SCP-2006 - Too Spooky (SCP Foundation) demonstrates a fondness for taking the forms of various entities and villains from the various horror and science fiction movies that it has witnessed. The most common form that SCP-2006 has taken is that of "Ro-Man" from the 1953 movie Robot Monster. 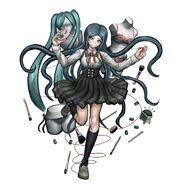 Tsumugi Shirogane's (Danganronpa V3) talent as The Ultimate Cosplayer far exceeds that of any other cosplayer even able to perfectly mimic fictional characters.
Community content is available under CC-BY-SA unless otherwise noted.