Wonderweiss Margela's (Bleach) Resurrección Extinguir can absorb massive infernos and seal them into his body.

The ability to absorb fire and utilize it in some way. Sub-power of Fire Manipulation. Variation of Energy Absorption and Elemental Absorption.

Users can absorb fire, while removing it from the source, into their body and use it in various ways, gaining some form of advantage, either by enhancing themselves, gaining the drained power, using it as power source etc., either temporarily or permanently. 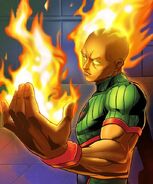 Houndoom (Pokemon) using its "Flash Fire" ability to absorb fire attacks.
Add a photo to this gallery
Retrieved from "https://powerlisting.fandom.com/wiki/Fire_Absorption?oldid=1419168"
Community content is available under CC-BY-SA unless otherwise noted.