"With his mighty flames, he can sink fleets of battleships, burn great cities to the ground, unleashing a blazing hell on earth!"
― Gatz on the Flame-Flame Fruit/Mera Mera no Mi (One Piece)

"Fire is the illumination of judgment that vanquishes all evil, while at times a gentle blessing given to men by gods, it is also a terrible curse which annihilates everything."
― Stiyl Magnus (A Certain Magical Index)

"Fire is alive. It breathes, it grows. A burning curse that spreads and destroys anything in its path."
― Jeong Jeong (Avatar The Last Airbender)

"The power of fire is the power to burn everything, to burn the world amidst the raging flames."
― Ignia (Fairy Tail)

The ability to use fire as a form of attack. Sub-power of Fire Manipulation. Variation of Elemental Attacks and Energy Attacks. Opposite to Fire Defense.

The user can utilize fire to attack targets. The exact nature of this attack may come in various shapes and sizes, intensities, or forms. For example, one user may hurl explosive balls of fire while another may augment other forms of attack with fire.

... Zanka no Tachi, Kita: Tenchi Kaijin which incinerates all into nothingness by sending out a slash of flames and heat...

... and Hado 96: Itto Kaso which creates a massive blade of fire that can incinerate his foes at the cost of his arm.

As the Fire Dragon Slayer, Natsu Dragneel (Fairy Tail) has a variety of powerful fire-based attacks he can use during combat, like his Crimson Lotus: Exploding Flame Blade...

Itachi Uchiha (Naruto) using Amaterasu during his duel with his brother, Sasuke...

... Inferno Style/Blaze Release: Honoikazuchi to shape the black flames of Amaterasu into spikes...

Portgas D. Ace (One Piece) using his signature technique Fire Fist/Hikan, to blast through a fleet of Barque Works Ships...

...Higan, which turn his fingertips into flames and shoot off bullets of fire...

...and his ultimate technique, Dai Enkai: Entei, a gigantic fireball resembling the sun.

Sanji (One Piece) using his Diable Jambe technique to burn a Kraken with blazing flames.

A homage to his late brother Ace, Monkey D. Luffy (One Piece) uses Gum Gum/Gomu Gomu no Red Hawk to launch a fiery fist that explodes on impact.

Sabo (One Piece) copies and uses his brother's Ace's signature Hikan/Fire Fist technique after eating the Mera Mera no Mi...

...and uses Kaen Ryuou to blast away Jesus Burgess.

With his Incineration Cannons, Genos (One-Punch Man) can fire large and powerful blasts of fire...

...and later uses his upgraded Incineration Cannons to fire an enormous inferno.

While using his Ninpo: Fire Monk, Gabimaru (Hell’s Paradise: Jigokuraku) can produce and create potent fiery attacks with the appearance of a deadly inferno...

...he can expel a large torrent of fire with his Ninpō: Fire Bridge.

Hiei (Yu Yu Hakusho) concentrating his Black Flames into his sword.
Add a photo to this gallery

A Dark Wizard (Harry Potter) casting Fiendfyre.
Add a photo to this gallery

Smaug the Golden (The Hobbit)
Add a photo to this gallery 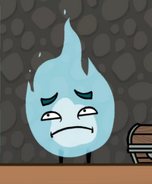 Fatuo (Kofi)
Add a photo to this gallery

Cinder Fall (RWBY) attacking Pyrrha with fire.
Add a photo to this gallery
Retrieved from "https://powerlisting.fandom.com/wiki/Fire_Attacks?oldid=1540478"
Community content is available under CC-BY-SA unless otherwise noted.