The power to project beams of concentrated fire that burns anything upon contact. Sub-power of Fire Attacks. Variation of Elemental Beam Emission.

Cinder Fall (RWBY) projects a massive beam of fire in her battle against Ozpin.

Eda Clawthorne (The Owl House) summoning a beam of fire. 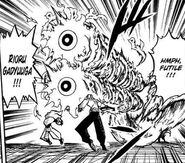