Ragnaros (Warcraft) is the Elemental Lord of Fire

Become the embodiment of the element of fire.

The power to become the embodiment of the element of fire. Variation of Elemental Embodiment and Fire Manipulation.

The user becomes a physical manifestation or personification of the element fire. As a result, the user has limitless control over and immunity to it.

Ormagöden (Brütal Legend) is a great and fearsome beast whose very being represented the four elements of the Brütal Realm - Metal, Noise, Blood and Fire - his death imbedding these four elements into the world, transforming it forever.

Salamander (Valkyrie Crusade) is the incarnation of fire.

Balthus (Adventure Time) the Fire Elemental of the prehistoric era. 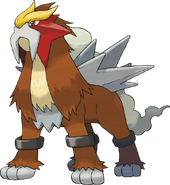 Aka/Red (Isekai Shokudou) the dragon god of fire.
Add a photo to this gallery
Retrieved from "https://powerlisting.fandom.com/wiki/Fire_Embodiment?oldid=1296548"
Community content is available under CC-BY-SA unless otherwise noted.