Be immune to the fire.

The Human Torch (Marvel Comics) is unaffected by heat and flames and cannot be scalded or burned by any heat source whose level is below that of his maximum output. 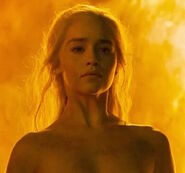 Vampirella (Vampirella) is immune to fire, with even hellfire doing little more than burning her clothes.

Ultimate Aggregor (Ben 10: Ultimate Alien)
Add a photo to this gallery
Retrieved from "https://powerlisting.fandom.com/wiki/Fire_Immunity?oldid=1332267"
Community content is available under CC-BY-SA unless otherwise noted.