"With his top-tier fire magic, they say that he can effortlessly wipe out a building with a single spell. The hunter who's known as the Ultimate Soldier."
― Sung Jin-Woo on Choi Jong-In (Solo Leveling) 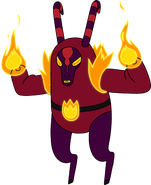 The Fire Dragon Slayer, Natsu Dragneel, (Fairy Tail) is a powerful Fire Mage, who can create, control, fight and even eat fire as well is immune to it.

Jiraiya (Naruto) was an impressive user of Fire Style/Release techniques. 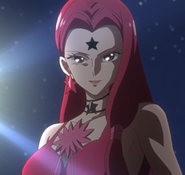 One of the Witches 5, Eudial (Sailor Moon Crystal) is able to use fire magic.

An S Rank Hunter, Choi Jong-In (Solo Leveling) is one of the world's greatest fire mages...

...with complete mastery, he can use of one his discarded cigarettes...

...to unleash a powerful torrent of flames...

Crabbe/Goyle(Harry Potter) using Fiendfyre, a cursed flame that ignites and incinerates anything it touches, from physical objects to enchanted water to its own caster.

Muspell (Valkyrie Crusade)
Add a photo to this gallery
Retrieved from "https://powerlisting.fandom.com/wiki/Fire_Magic?oldid=1525688"
Community content is available under CC-BY-SA unless otherwise noted.