The user can use fire to power a strike (punch, kick, headbutt, etc.), allowing burning damage from the fire used in the strike.

When using his Spartan Rage, Kratos (God of War) envelops his fists in flame.

With flames as hot as the devil's spices, Sanji's Diable Jambe (One Piece) infuses his legs with extremely powerful intense heat that's capable of burning his opponents alive.

A homage to his late older brother Portgas D. Ace, Monkey D. Luffy's Gum Gum/Gomu Gomu no Red Hawk (One Piece) is a fiery fist that explodes on impact.

...and Kaen Ryuou to blast his opponent into buildings in a fiery blaze. 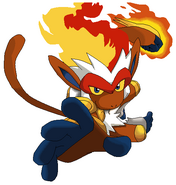 One Minute Melee S3 EP3 - Natsu vs Ace (Fairy Tail vs One Piece)
Add a photo to this gallery
Retrieved from "https://powerlisting.fandom.com/wiki/Fire_Strike?oldid=1574392"
Community content is available under CC-BY-SA unless otherwise noted.