Users can create walls of fire from nothing or by shaping the existing fire, they can shape the wall to any shape they want, but afterward,s the walls are unchanging and immobile.

Nuova Shenron (Dragon Ball GT) uses his Nova Sphere to trap himself and his opponent in a volatile firewall sphere. 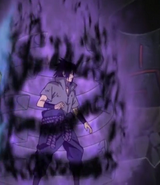 Obito Uchiha (Naruto) using the Uchiha Flame Formation to create a barrier that burns anything that touches it.

Portgas D. Ace (One Piece) uses the "Enjōmō" to separate Whitebeard and himself from the Spade Pirates.
Add a photo to this gallery
Retrieved from "https://powerlisting.fandom.com/wiki/Fire_Wall_Generation?oldid=1525580"
Community content is available under CC-BY-SA unless otherwise noted.