The ability to wield or create weapons with pyrokinetic power. Variation of Element Weaponry.

User can to create or wield weaponry with power over fire, which grants the user a wide variety of fire-based abilities. This ability is not only specific to mystic weapons, but also technologically advanced weapons. The power of the weapons depends on what they were created for or what level of fire-based ability they possess.

...And Ryūjin Jakka's Bankai, Zanka no Tachi, which generates heat comparable to the sun itself.

Recca Hanabishi (Flame of Recca) using Saiha to create a blade out of flames which has strength dependent on its temperature.

Zuko (Avatar: The Last Airbender) channeling flames down his blades.

Really Really Incredibly Destructive Machine (Codename: Kids Next Door), one of the Delightful Children's robots, has a pair of flaming chainsaws for hands. 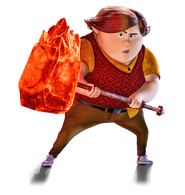 ...and fire whip in action. 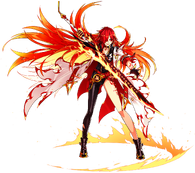 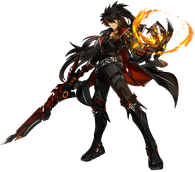 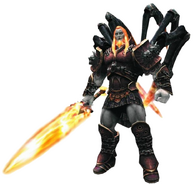 Ares (God of War series) can create various weapons such as a gigantic war hammer, an axe, and a sword enveloped in flames.

Raziel (Legacy of Kain) gained the Fire Reaver after infusing the Wraith Blade with the souls of the original Conflict and Nature Pillar Guardians...

...and can using the Balance Emblem to infuses the Reaver with fire.

Andrea Thomas (Ordeal) can use the 5% of Ilios Phoenix Flame to infuse her superpowered katanna with powerful fire.

Leo Thomas (Ordeal) with his Talent, Ilios Phoenix Flames, can create a sword out of fire.