The power to create webs that are made out of fire. Sub-power of Pyrokinetic Constructs. Variation of Elemental Web Creation.

User can create sticky threads of webs that generate or are made of fire. The flaming web can act as a barrier to by the user time, a defensive perimeter or a trap/binding. 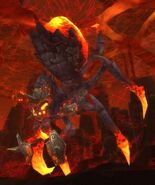 Beth'tilac (Warcraft) can create web of fire
Add a photo to this gallery
Retrieved from "https://powerlisting.fandom.com/wiki/Fire_Web_Creation?oldid=1126111"
Community content is available under CC-BY-SA unless otherwise noted.