User can create fire whips from nothing or by shaping the existing fire. 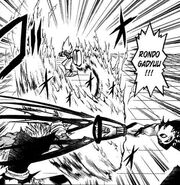 Donquixote Doflamingo's (One Piece) OVERHEAT technique, a thick rope made of condensed strings shot from his palm.
Add a photo to this gallery
Retrieved from "https://powerlisting.fandom.com/wiki/Fire_Whip_Creation?oldid=1306201"
Community content is available under CC-BY-SA unless otherwise noted.