Slice n' Splice (Kirby: Right Back at Ya!), with his moon rod, can split a person into their masculine and feminine halves.

Divide anything to create new forms.

The ability to divide anything into fractions of themselves. Opposite to Fusionism.

The user of this ability can divide anything, including powers, objects, living things, etc. into separate existing aspects.

The Ferula Gemini (Buffy the Vampire Slayer) projects energy bolts that physically split the personality of whoever they hit into two separate entities, one with the strong qualities and one with the weak qualities...

...as demonstrated with Xander Harris.

...thus, in the case of Danny Fenton/Phantom, his human and ghost halves were split apart.

The Four Sword (The Legend of Zelda) splits whoever wields it (in this case, Link) into four identical copies.

After perfecting his serum (Once Upon a Time), Dr. Jekyll...

...and Mr. Hyde were finally able to successfully seperate.

Mizumi (Return to Labyrinth) has the power to create ablations - beings made from the mental and emotional aspects of one's personality - from herself and others.

Lilith's Mirror (Rosario + Vampire) brings out the true form of any monster who looks into it...

...but in the case of Moka Akashiya, her Inner and Outer personas were split into two separate entities.

The Key of Oz (Supernatural) aside from many other abilities can split people into good and evil counterparts of themselves.

The Ring of the Nine Dragons (Xiaolin Showdown) is a Shen Gong Wu that divides its user into a maximum of nine replicants of themselves, each of them harboring a primary quality of the person. 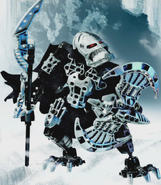 Vezon (BIONICLE), the result of the Spear of Fusion accidentally splitting the Piraka, Vezok into two separate beings.

The Tiger Talisman (Jackie Chan Adventures), when halved, splits the user's Yin and Yang halves into two separate beings.
Add a photo to this gallery
Retrieved from "https://powerlisting.fandom.com/wiki/Fission_Inducement?oldid=1503109"
Community content is available under CC-BY-SA unless otherwise noted.