The ability to flatten oneself and compress one's body into two-dimensional space. Sub-power of Elasticity. Combination of Dimension Shifting and Body Manipulation.

The user is or can make themselves turn completely flat with no or almost no depth. This ability can allow them to slide through cracks in walls, hide by standing sideways, stick to walls, and slide under locked doors. Some users can also choose freely shift parts of their body to become flat and sharp. 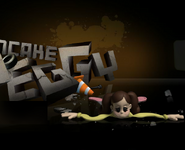 The Boneless (Doctor Who) are beings from a 2-dimensional universe.

Link (The Legend of Zelda: A Link Between Worlds) gained the ability to transform from corporeal form to painting form at will after being hit by one of Yuga's picture imprisoning spells whilst wearing a mysterious bracelet.

...including doing so selectively.

…and himself into flattened states.

Tom Turbo (Tom Turbo) can make himself flat to crawl beneath doors using one of his 111 tricks.

Flat Stanley (Flat Stanley) was flattened in bed by a bulletin board that fell on him in his sleep.

After being bombarded with dangerous levels of radiation, Stuart Lowe/2-D Man (Batman Beyond/DC Animated Universe/DCAU) became a two-dimensional being with the ability to stretch his body to incredible lengths.
Community content is available under CC-BY-SA unless otherwise noted.
Advertisement