Cameron Hicks (Alphas) can flawlessly perform others' actions without any difficulties.

The power to flawlessly perform any physical act without difficulty.

The user's physical abilities are heightened to the point where they can flawlessly perform any physical act without difficulty. The user can imagine themselves doing the act in their mind, then they're able to perform it without any problem. Users can perfectly and without a single flaw or mistake perform or replicate any and every type of movement whenever they want with perfect precision and zero effort, instantly. This could range from free running, to juggling swords while walking on a tightrope, to doing multiple back-flips.

...and slice a tank's missile in half with his sword. 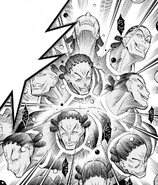