Yume Hasegawa (Pupa) fed her immortal flesh to her brother Utsutsu, turning him into a half-Pupa with great regenerative powers.

Transfuse one's flesh into others.

"I went to sleep with a bellyache that night and woke up amazed to be Alive. More than just alive. Energized!! I felt great! It had to be the Meat!! Whatever weird space vitamins it had made the taste almost worth it!!"
― Jo Nah/Ultra Boy (Legends of the Legion #1)

The ability to transfuse one's flesh tissues into others. Technique of Flesh Manipulation.

The user can transfer their flesh into another individual's, or taking flesh from another person into oneself, replacing lost and damaged tissues or enhancing the recipient's body. 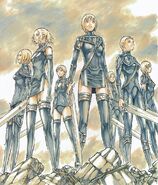 Great Red (High School DxD) infused his own flesh into Issei Hyoudou, turning him into a dragon himself.

Danzō Shimura (Naruto) received flesh transfusion from Orochimaru's experiments, granting him Hashirama Senju's flesh and DNA, along with enhanced vitality, a Regenerative Healing Factor and the ability to use Wood Release.

Madara Uchiha (Naruto) infused Hashirama Senju's flesh into himself to awaken the Rinnegan, and later the flesh of Gedo Statue into himself and Obito Uchiha to recreate lost tissues, as well as gaining a Regenerative Healing Factor and Semi-Immortality.

Kinkaku and Ginkaku (Naruto) eating Kurama's chakra flesh, thus infusing them with it and a huge reserve of chakra.

...granting her supernaturally active mitochondria and a variety of different powers.

Gyokuro Shuzen (Rosario + Vampire) infused the flesh of Alucard into members of the Shuzen family, turning them into monstrous ghoul servants. 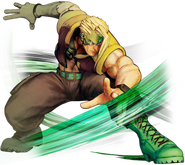 After his death at M. Bison's hands, Charlie Nash (Street Fighter) was infused with the flesh of the Illuminati bioweapon Eleven, bringing him back from the dead.

Ken Kaneki (Tokyo Ghoul) had an intestine transfusion from a ghoul donor, thus turning him into a One-Eyed Ghoul.
Add a photo to this gallery
Retrieved from "https://powerlisting.fandom.com/wiki/Flesh_Transfusion?oldid=1503134"
Community content is available under CC-BY-SA unless otherwise noted.