Superpower Wiki
Register
Don't have an account?
Sign In
Advertisement
in: Candidates for deletion, Powers, Supernatural Powers,
and 3 more

This page is a candidate for deletion. Reason: This power just describes using the environment to your advantage. That's not a superpower, anyone can do that..

If you disagree with its deletion, please explain why at in this page's talk page/comments or improve the page and remove the {{delete}} tag.

Remember to check what links here and the page history before deleting.

Use the environment to one's advantage.

The ability to use the environment to one's advantage. Opposite to Iso-Motion.

The user can use the environment to their advantage, allowing them to perform feats such as kicking off almost any surface, air dashing, swinging around lampposts, grinding along rails, and battling enemies with speed and style.

The user can also implement the movement into their fighting style, allowing them to fluidly connect their physical attacks with coordinated follow-ups.

Whenever Son Goku (Dragon Ball series) accesses Ultra Instinct -Sign-, he is able to instinctively and swiftly avoid and evade any attack that comes his way.

Like his namesake, Monkey D. Luffy's (One Piece) tremendous agility combined with his elastic rubber body allows him to perform nearly impossible feats of acrobatics, allowing him to evade attacks of powerful and fast fighters such as Blueno of CP9.

Thanks to his mastery of the Black Leg Style, Sanji (One Piece) can perform tremendous feats of athletic prowess from various handstands to double jumping.

Roronoa Zoro (One Piece) is immensely agile and incorporating his outstanding athletic prowess with his powerful swordsmanship.

Izuku Midoriya (My Hero Academia) can use his Quirk, One For All, to perform acrobatic feats that wouldn't be possible for a normal human

Bakugo Katsuki (My Hero Academia) uses his Quirk, Explosion, to move around in an area much faster and more agile than a normal person

Thanks to his natural balance and training from Stick, Matt Murdock/Daredevil (Marvel Comics) can effortlessly dodge an incoming police car.

Despite the heaviness of his skeleton, James "Logan" Howlett/Wolverine's (Marvel Comics) agility, balance, and bodily coordination are all enhanced and trained to levels far beyond the natural physical limits and capabilities of the finest human specimen. 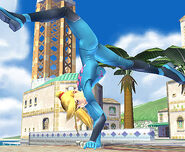 Samus Aran's (Metroid series) infusion with Chozo DNA, as well as her warrior training since her childhood, has made her into a superior athlete. Even without the aid of her Power Suit, she is a skilled acrobatic and well-coordinated fighter.
Community content is available under CC-BY-SA unless otherwise noted.