The Lunch Lady Ghost (Danny Phantom) has control over every kind of food, predominantly meat, which she can use to attack to her opponents.

The power to manipulate food.

User can create, shape and manipulate food and other edible substances, including their shape, amount, taste, appearance, etc.

Baphomet (The Wicked + The Divine) was able to communicate with the Morrigan using ketchup drawn as a pentacle. 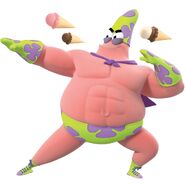 Patrick/Mr. Superawesomeness (The Spongebob Movie: Sponge Out of Water) has the ability to control ice cream.

Tonio Trussardi's (JoJo's Bizarre Adventure Part IV Diamonds are Unbreakable) Stand, Pole/Pearl Jam can infuse themselves into his dishes, and increase the healing potency of the dishes to supernatural levels.

Due to eating the Bis-Bis Fruit/Bisu Bisu no Mi, Charlotte Cracker (One Piece) can generate and manipulate biscuits to a surprisingly powerful degree…

…enabling him to create an entire army of Biscuit Soldiers for combat.

Charlotte Galette (One Piece) generates and controls butter due to Butter-Butter Fruit/Bata Bata no Mi.

…creating candy that's strong enough to bind and hold down the superhuman children of the Vinsmoke Family.

…and with his mastery, he can shape mochi into donuts to create giant arms for powerful attacks and combat.
Add a photo to this gallery
Retrieved from "https://powerlisting.fandom.com/wiki/Food_Manipulation?oldid=1743062"
Community content is available under CC-BY-SA unless otherwise noted.