The power to create weapons from food. Sub-power of Food Constructs. Variation of Organic Weaponry.

User can create or use weapons formed from various kinds of food. 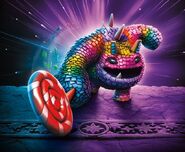 Painyatta (Skylanders) attacks with candy, such as giant lollipops, candy canes and rock candy
Add a photo to this gallery
Retrieved from "https://powerlisting.fandom.com/wiki/Food_Weaponry?oldid=1544301"
Community content is available under CC-BY-SA unless otherwise noted.