Create constructs out of the force-fields.

The power to craft a numerous variety of desired weapons and tools out of force-fields. Sub-power of Force-Field Manipulation. Variation of Constructs Creation.

Users can turn force-fields into tools, objects, weapons and other items, create semi-living constructs and/or create structures/buildings of varying permanence. Users who have mastered this ability can use it for almost any situation, creating anything they need. 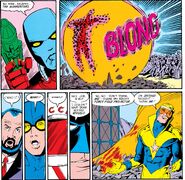 Bartolomeo (One Piece) can shape his barriers into whatever form he wishes, such as to create a flight of stairs...

...or a tennis racket to defend his friends from attacks.

Blackfire (Teen Titans)
Add a photo to this gallery
Retrieved from "https://powerlisting.fandom.com/wiki/Force-Field_Constructs?oldid=1503181"
Community content is available under CC-BY-SA unless otherwise noted.