Users can create force-field walls from nothing by using one's own mind. They can shape the wall to any shape they want it to have, but afterward,s the walls are unchanging and immobile.

Sōsuke Aizen (Bleach) has an extraordinary mastery of defensive Kidō such as the Bakudō 81: Dankū.

Hachigen Ushōda (Bleach) can create powerful force-field walls of such power that they cannot be broken by Shinigami alone.

The Sound Four (Naruto) using the Four Violet Flames Formation to create four barrier walls to encompass the inside.

Bartolomeo (One Piece) creating a Barrier that he can even throw forward as a projectile weapon. 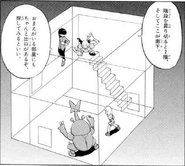 Mr. Mime (Pokémon) creating invisible walls via its Light Screen, to the point of creating an entire house.

Violet Parr (The Incredibles)
Add a photo to this gallery
Retrieved from "https://powerlisting.fandom.com/wiki/Force-Field_Wall_Generation?oldid=1513182"
Community content is available under CC-BY-SA unless otherwise noted.