Vergo (One Piece) coating his entire body with Busoshoku/Armament Haki to act as an armor.

Create armor from a force.

The ability to create armor around the user's body using a force field. Sub-power of Force-Field Constructs. Variation of Exoskeleton.

The user can form armor around their body or shape it from the force for protection and physical boost. With training, the user could shape the armor into new forms for weapons, transportation, even constructs of the element.

Sōsuke Aizen (Bleach) is extremely skilled user of Reiatsu, with fine enough control that he can stop Ichigo's sword with his finger…

…which result in his immediate defeat, due to Aizen's superior reiatasu.

After training for 3 months in the dangai world, Ichigo Kurosaki (Bleach) gained such a tremendous amount of reiatasu, that he could even stop the sword of Aizen himeself…

…to the point he became even stronger then Aizen, and was able to actually cut him gravely.

...creating a skin-level Energy Barrier to protect against Lavender's poison.

Vegito (Dragon Ball Z) uses a Saiyan Shield to protect himself from being absorbed by Super Buu.

While in his Legendary Super Saiyan form, Broly (Dragon Ball Z: Broly - Second Coming) reinforces his body with a tremendous amount of ki.

Pica (One Piece) uses Busoshoku/Armament Haki to armor his entire body with a spiritual armor.

While entering his Gour Fourth - Boundman, Monkey D. Luffy (One Piece) uses Busoshoku/Armament Haki to cover his entire body with a spiritual armor.

Latios (Pokemon) using Light Screen around his own body as armor.

Zebra (Toriko) can use his ability to create and control soundwaves to form his Sound Armor.

…in its powerful offensive mode.

Repeller (Batman Beyond) can use this ability with the use of a device.

Father (Star Wars) like other Force Wielders can manipulate the force in a way no other force sensitive users can.

Yin (Yin Yang Yo!) using her Foo Field in the form of an invisible armor.

Wes Keenan (Smallville) generates an invisible force field around himself that, according to Chloe Sullivan, can only be penetrated by a low-level nuclear blast.

The Magic Armor (The Legend of Zelda: Wind Waker) grants an invincible barrier around the user. 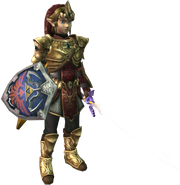 The Magic Armor (The Legend of Zelda: Twilight Princess) makes the wearer invincible with an armor barrier.