Kakine Teitoku (Toaru Majutsu no Index) is able to create and control matter that does not exist in this universe.

Manipulate material that is unnatural in property and/or appearance.

"According to this blinking light, the tentacle is made of electro-matter, matter's bad-ass grandma! Nothing from our universe can cut through it. Not diamondium, not diamondillium, not even your wife's pound cake, Hermes! She's a terrible cook. Anyway, we're all dead."
― Hubert J. Farnsworth (Futurama)

The ability to manipulate material that has foreign properties and/or appearance. Can be sometimes confused with some forms of Dark Matter Manipulation and other occasions Aether Manipulation.

The user can create and control a kind of foreign matter, this can include material of extra-dimensional origins, from different planets, originate from a divine plane, etc, all forms of material that does not exist in the familiar world.

For example, being able to generate and control supernatural matter that can be used to i.e: defy physics or create energy that has a completely different form and/or quantitative properties, thus defying natural science. This could also extend to different appearances, like a solid object having seemingly natural kaleidoscopic colors.

In general this power can range from just material of alien appearance to material that have abnormal properties to a normal perspective of concept. This power could be also extended to reality defying levels via the properties of said material. If done correctly the user can reach Nigh Omnipotent levels of abilities and there are nearly nothing the user can't achieve via these mediums.

In real life, there can be materials or elements that do not originate on earth and are not considered part of the periodic table.

If achieved correctly and mediated by the right materials the user can achieve: 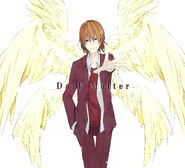 Kakine Teitoko/Rhinoceros Beetle 05 (Toaru Majutsu no Index) can generate and control matter that doesn't apply normal physics and can extend to an Imagination Based Superpower.

Upon undergoing her third transformation, Misaka Mikoto (Toaru Majutsu no Index) forms a large black sphere of energy, which could be described as something from another world that cannot be understood, and her desire to eliminate the parts she hates of Academy City.

Carina Walters (Marvel Comics), as an ancient and powerful alien being, can summon matter from various timelines and realities.

Yivo (Futurama) and his tentacles are composed of Electromatter, a form of matter from his universe that is immune to all forms of assault in this one.
Add a photo to this gallery

Tiberium (Command & Conquer) in its green and blue variants. Despite its extremely invasive and poisonous nature, it remains an invaluable resource, being a massive and inexhaustible power-source, and the basis of many cutting edge technologies.

Divinium (Element 115) was used to create the zombies as one of its side effects was the reanimation of dead cells. The Pack-a-Punch Machine, the Perk-a-Cola machines, and the other weapons are all powered by Element 115, along with the teleporters. It would appear Element 115 can also control the zombies, as the Focusing Stone is a shrunken-down meteor that one claims will let them control the world.

T-Energy (Sacred 2), the mutative primal substance at the origin of all life and magic.
Add a photo to this gallery

Usage of Divinium (Call of Duty Zombies) can make Perk-a-Cola Drinks that can empowers the user who drinks it.

Usage of Divinium (Call of Duty Zombies) can reanimate dead corpses and even control them.

Usage of Divinium (Call of Duty Zombies) can bend space and time to cause teleportation.

Usage of Divinium (Call of Duty Zombies) can make unique weapons such as the Ray Gun. 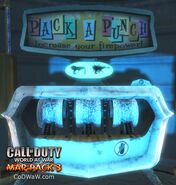 Usage of Divinium (Call of Duty Zombies) can give weapons an upgrade.
Add a photo to this gallery
Retrieved from "https://powerlisting.fandom.com/wiki/Foreign_Material_Manipulation?oldid=1691408"
Community content is available under CC-BY-SA unless otherwise noted.