Bugs Bunny (Looney Tunes) proves time and time again, that as long as it's funny, it's possible.

"Its always so lively here, chu. And it will always stay that way, chu! Because that's the elegant youkai apartment life!"
― Talking Birds (Youkai Apartment no Yuuga na Nichijou)

"I do not enjoy playing with you. Everything's so silly!!"
― Cleveland Brown to Peter Griffin (Family Guy)
The ability to control everything in a fun fashion. Highest form of Cartoon Physics.

Genie (Aladdin) is well known to have fun in many adventures with his magic and boundless shapeshifting powers. 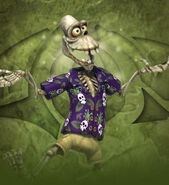 Party Juju (Tak and the Power Juju), as his name implies, is the Juju of parties and can make them last forever.

Deadpool (Marvel Comics)
Add a photo to this gallery
Retrieved from "https://powerlisting.fandom.com/wiki/Fun_Lord?oldid=1552335"
Community content is available under CC-BY-SA unless otherwise noted.