Interact with a game in real life.

The ability to interact with a game as if it were real. Opposite to Video Game Physics.

Users interact with a game as if it were real and get enhancements of different types depending on what game the user created/entered. May stem from Reality Warping.

Yukio Hans Vorarlberna (Bleach) using his Invaders Must Die to turn his video game into a pocket dimension. 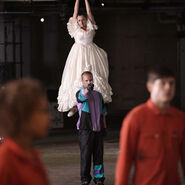 Dark Yugi (Yu-Gi-Oh!) playing a Shadow Game, in which results turn into reality with possible death at line.

Tim (Misfits) viewing the world as a video game.
Add a photo to this gallery
Retrieved from "https://powerlisting.fandom.com/wiki/Game_Interaction?oldid=1520494"
Community content is available under CC-BY-SA unless otherwise noted.