Hedorah (Godzilla vs. The Smog Monster) has a physical body composed of waste and smog

have a physical body made up of garbage.

"You are garbage made flesh!"
― Carl Carlson (The Simpsons)

The power to transform into or have a physical body made up of garbage. Technique of Garbage Manipulation.

User is made up of or is able to transform their body completely into garbage material. Users transformed form can be anatomically identical to their normal form, aside of being made of garbage, in which case it contains all to organs and is somewhat vulnerable to attacks. Alternately user can transform into homogeneous matter, without any part of their form being more important than the other.

Garbicus (Flying Rhino Junior High) is a monster created from raw garbage with an organic exoskeleton...

...an aluminum armor underneath that... 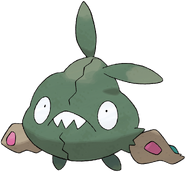 Trubbish (Pokémon) were created by the combination of garbage bags and industrial waste. 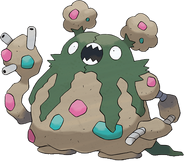 Garbodor (Pokémon) is the evolve form of Trubbish; also resembles a garbage.

Peter Griffin (Family Guy) as a living garbage pile.
Add a photo to this gallery
Retrieved from "https://powerlisting.fandom.com/wiki/Garbage_Mimicry?oldid=1424527"
Community content is available under CC-BY-SA unless otherwise noted.