Use the traits of gargoyle.

The power to use the abilities of gargoyle. Variation of Mythic Physiology.

User with this ability either is or can transform into an gargoyle, a winged humanoid with a penchant for perching on high terrain. Given their origins as statues of grotesque humans and animals designed to ward off evil spirits and channel rainwater from rooftops, they also tend to have an ability to turn to stone, voluntarily or not. Few are actually living stone.

Although many gargoyles are relatively humanoid, they tend to have number of animalistic features, like horns, tails (often snake-like), unusual ears, fangs and/or claws. More animal-like individuals exist, as well as some that are bizarre, chimeric combinations of several species.

Traditionally, in folklore, they were benevolent despite their appearance, which was framed as being frightful to scare demons away. This is less common in modern fiction. 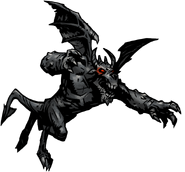 Victor, Hugo, and Laverne (The Hunchback of Notre Dame)

Chernabog (Once Upon a Time)

Gargoyle (Valkyrie Crusade)
Add a photo to this gallery
Retrieved from "https://powerlisting.fandom.com/wiki/Gargoyle_Physiology?oldid=1513214"
Community content is available under CC-BY-SA unless otherwise noted.