The ability to release gaseous matter on a specific target area. Sub-power of Gas Attacks. Variation of Inorganic Blast. 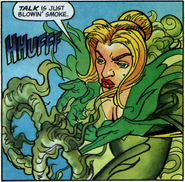 Caesar Clown (One Piece) can release a variety of gases due to his Gasu Gasu no Mi power.

Magellan (One Piece)
Add a photo to this gallery
Retrieved from "https://powerlisting.fandom.com/wiki/Gas_Blast?oldid=1261729"
Community content is available under CC-BY-SA unless otherwise noted.