The user can create, shape and manipulate anything that is gaseous, a phase of matter characterized by relatively low density, high fluidity/no definite shape, and lack of rigidity. Gas is very compressible but tends to expand indefinitely, and it fills any container. A small change in temperature or pressure produces a substantial change in its volume.

As most gases are difficult to observe directly, they are described through the use of four physical properties or macroscopic characteristics: pressure, volume, number of particles (chemists group them by moles) and temperature. 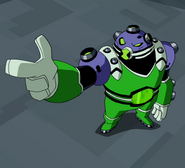 Gutrot (Ben 10 Omniverse) can generate and manipulate any kind of gas imaginable.

The Breeder (Call of Duty: Ghost) can fire large clusters of gas that is significantly stronger than a scorpion gas attack.

After he ate the Gasu Gasu no Mi, Caesar Clown (One Piece) turned into a Gas Human and gained the ability to create, manipulate, and transform into a gas.

Zyklon (Marvel Comics) is a demon-enhanced Himmler and member of the Lethal Legion, one of his primary powers is emission of highly toxic gas. 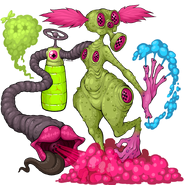 Choak (Mortasheen) can produce and manipulate highly toxic, hallucinogenic gas as an extension of herself.
Community content is available under CC-BY-SA unless otherwise noted.