At the very beginning of the universe, the Presence created Michael, Samael and Gabriel (DC Comics/Vertigo) and charged them with the task of creating the cosmos. Michael created raw power, Samael shaped it into suns and Gabriel organized them into consistency.

The genesis aspects are different ways how the world, the universe or existence itself begins, whether it is by abstract means like creation, raw power or strength of will, to more physical aspects like light, fire, water, etc. 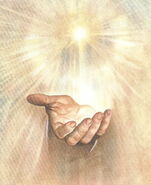 God/Yahweh/Allah (Abrahamic Religions) uttered the command "let there be light", and there was light in the dark nothingness.

Ormagöden (Brütal Legend) is a fearsome beast who represented the four elements of the Brütal Realm - Metal, Noise, Blood and Fire - his death embedding these four elements into the world, transforming it forever into what it is.

The First Flame (Dark Souls) - as its name implies - was the first fire to exist, creating disparity, heat and cold, light and dark, and beginning the Age of Fire. In its death, the Age of Dark begins.

The Encyclopods (Futurama) was one of the very first species in the universe, capable of storing the DNA of all living creatures and recreating them after they go extinct.