Have blood that creates life.

The power to have blood that creates living beings. Variation of Blood Property Manipulation, Genesis Creation and Supernatural Blood. Not to be confused with Blood Cloning. 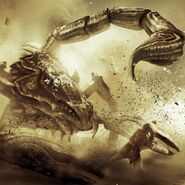 Scorpiochs (Clash of the Titans 2010 Remake) were born from Calibos' cursed blood mixed with the desert sand.
Add a photo to this gallery
Retrieved from "https://powerlisting.fandom.com/wiki/Genesis_Blood?oldid=1326482"
Community content is available under CC-BY-SA unless otherwise noted.