Exclusive to Saiyans or those with Saiyan heritage, the Zenkai gene (Dragon Ball series) enables the user to increase their strength after near-fatal injuries, such as with Son Gohan.

"You can't escape me! I've got grasshopper thighs and the sonar of a killer whale!"
― Sideshow Bob (The Simpsons)

The power to possess genetically-exclusive traits and powers. Variation of Power Inheritance.

The user possesses and is able to utilize special traits and powers that are exclusive to their genetic code, either of their race/species, or family line.

As a member of the Ackerman Family, Mikasa Ackerman (Attack on Titan) possesses resistance to mental manipulation and physical abilities beyond those of a normal human.

Tien Shinhan (Dragon Ball series) is a descendant of the Three-Eyed Clan, and thus, he possesses a unique physical composition as a throwback to his ancestors.

Thanks to the Saiyan cells within his body, Cell (Dragon Ball Z) possesses the Zenkai gene, enabling him to increase his strength after recovering from near-fatal wounds.

As a descendant of the Bael Clan, Sirzechs (Highschool DxD) can use the Bael's Power of Destruction. 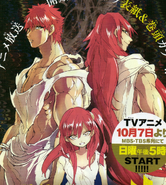 All members of the Fanalis (Magi: The Labyrinth of Magic) possess superhuman strength, speed, and senses.

The Sharingan (Naruto) is genetically exclusive to members of the Uchiha clan.

The Byakugan (Naruto) is genetically exclusive to members of the Hyūga and Ōtsutsuki clan.

Thanks to his Kaguya Clan's Kekkei Genkai, Kimimaro (Naruto) can manipulate his skeletal structure as he sees fit.
Add a photo to this gallery

Ludger Kresnik's Chromatus form (Tales of Xillia 2) is a power exclusive to the Kresnik bloodline.
Add a photo to this gallery

Weiss Schnee's (RWBY) glyph Semblance is a hereditary trait of the Schnee family.

Ruby Rose (RWBY) is descended from a race of Silver-Eyed Warriors,...

...beings said to be able to strike down Grimm with a single look.
Add a photo to this gallery
Retrieved from "https://powerlisting.fandom.com/wiki/Trait:Genetic_Traits?oldid=1519384"
Community content is available under CC-BY-SA unless otherwise noted.