Mothra (Godzilla) is the embodiment of peace.

Become the embodiment of gentleness

"I'm gonna be the nicest man this world has ever seen. I said "man," not "man-God"! Keep your pants on!"
― Ned Flanders (The Simpsons)

The power to become the embodiment of gentleness. Variation of Virtue Embodiment.

The user of this power can become the embodiment of Gentle, they are able to be delicate and treat everything with great care and attentiveness. They may be able to convert their gentle works and actions into a sort of energy to become a weapon or an attacking offense and also making it become a support to others as well as defense from any opposing powers of this embodiment. 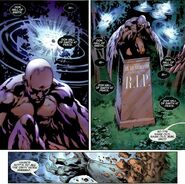 Thanks to the Power of Dove, Donald Hall (DC Comics) personified the concept of peace, making him immune to the Black Lanterns reanimation power. Showing that even in death Dove's power cannot be overcome by violence.
Add a photo to this gallery
Retrieved from "https://powerlisting.fandom.com/wiki/Gentleness_Embodiment?oldid=1503392"
Community content is available under CC-BY-SA unless otherwise noted.